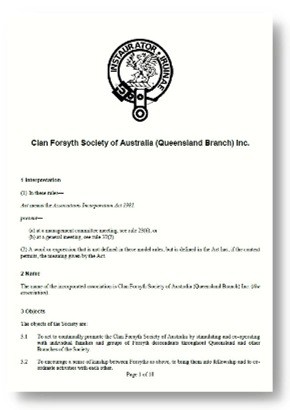 A “General Meeting” was held to discuss a “Special Resolution” subject of Incorporation, the Queensland Branch, attended by members in good standing on Saturday 25th July 2015, the topic of incorporation was resolved.

To Remove Personal Liability from an Incoming 2015 Executive and Committee

It was originally intended to bring this matter before an annual general meeting, however in order that any members elected at the upcoming AGM into  executive positions, shall no longer be asked to be personally assume responsible, for that affairs of an unincorporated association, it was decided that this matter has been moved ahead, so that it can be completed before the next AGM and the election of new office bearers in 2015.

Conduct of this Meeting

An advice was provided to all current members regarding the need for these changes by the Branch President Mrs Val Ashton as per the linked advice below and the formal advice of the meeting also linked, which were posted or provided to all members in good standing on 8th July 2015.

Amendments and updates to Clan Objectives

In the adoption of the proposed model rules, we were simply required to “cut and paste” our name and existing organisational objectives from our old constitution to proposed new version. However upon examination of these objectives we noted several grammatical and spelling error in addition to several clauses which it was felt were either unpractical or that we as an organisation with an aging membership and limited resources were incapable of achieving.

In recognition of our own constraints and limitations the original set of 12 objectives in the 2008 Rules has be reduced and modified to 10 only. The following objectives being the most notable omissions and/or amendments.

A full list of these amendments with be raised and discussed at the meeting next Saturday. I have attached a copy for both perusal and reference.

There will additionally also be some other proposed minor changes, such as changing our Patron for our branch from the current Chief named as an individual (Alistair Charles William Forsyth), to that of a position holder only i.e. “Chief of Clan Forsyth”.

Application to Incorporate an Association and meeting minutes

In order to provide you with full transparency of this process, I have included our a link to our application to DOFT for the Incorporation of the Queensland branch  at the time of lodgement. 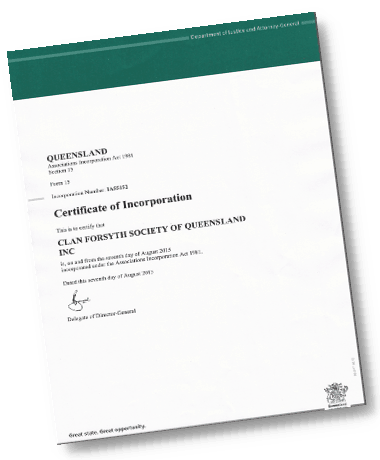 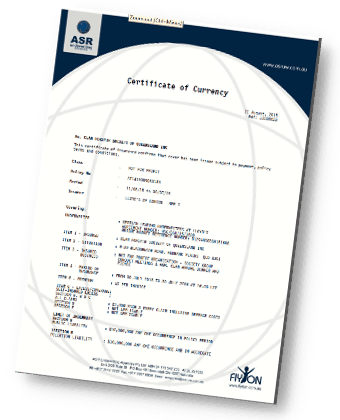 All member of the Clan society who renewed their membership for the current financial year prior to the 7th AUgust 2015, will need to register their details of the current membership form which can be downloaded from the link below and either completed at the next Clan Function, should you not receive a printed copy of these documents by post before then.