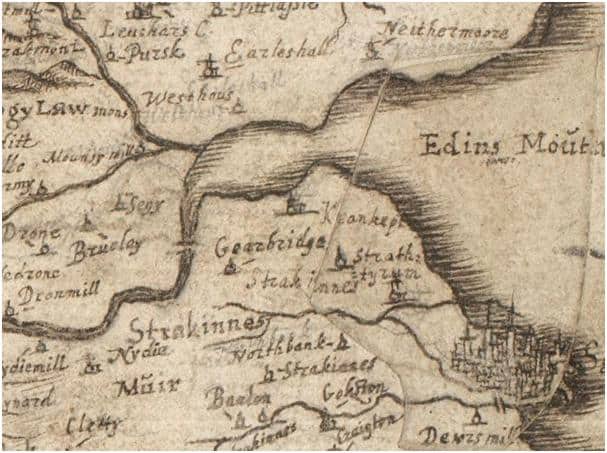 The lands of Nydie lie on the South bank of the river Eden in Fife where it flows into the sea to the west of St Andrews.  They are first mentioned in a charter of King Malcolm IV at St Andrews on 20th November 1160, in which the King confirms land grants made to the Priory of St Andrews by King David I.  In 1194 Duncan 5th Earl of Fife granted permission to the Canons of St Andrews to make their mill dam at Nydie.

WILLIAM de FORSYTH, second son of Osbert de Forsyth, who had been Serjandus of Stirling was appointed Baillie of Edinburgh in 1374, he became the Queen’s Clerk of Liverance to Queen Euphemia Ross, the second wife of King Robert I. He was father of:

WILLIAM FORSYTH 1st of NYDIE went to reside in St Andrews 1422 in lands adjoining those of the University there.  He received a grant of the lands of Nydie from Bishop Henry Wardlaw in 1434 and a further grant of the adjoining lands of Clettow from the Bishop in 1435.   He was father of: 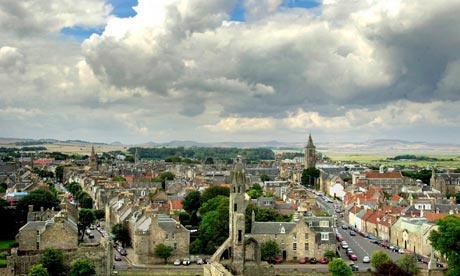 Modern day view from the “Tower” St Andrews University may have changed little.

ALEXANDER FORSYTH 2nd of NYDIE, he matriculated at St Salvators College, University of St Andrews in 1446 and succeeded that year and died in 1461. He was the father of:

ALEXANDER FORSYTH 4th of NYDIE. He was appointed Deputy Sherriff of Fife on 4th September 1484.  On 4th  June 1491 he gave sasine to Robert Wardlaw, burgess of Edinburgh for the lands of Fulford, that had first been acquired by his great-great grandfather in 1389.  Whilst in 1492 Armorial Bearings were granted to his posteritory by the Lord Lyon King of Arms, Sir James Balfour, The Blazon being as follows: 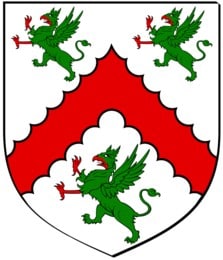 On 5th September 1494 he gave the rental of  £3.10 shillings from his tenement in Market Street, St Andrews towards the founding of a new chapel in the Parish Church of the Holy Trinity.

On 26th February 1506 he resigned the lands of Clettow in favour of David Learmonth, citizen of St Andrews and Chamberlin of the Archbishop, who as Sir David became Provost of St Andrews from 1511to 1515.   Alexander had married Elisabeth Traille in 1489,she was neice of Walter Traille, Archbishop of St Andrews but she was a widow in 1513.   Alexander died on the field of Flodden.

He was father of:

JOHN FORSYTH 5th of NYDIE succeeded as a minor but on 13th February 1520 he subscribed to a Mutual Bond with sixteen other Fife Lairds at Scoone that ”they would take true part with each other in all lawful disputes and specially in defence of their persons and heritage except against the King James V”. 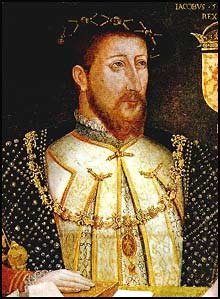 On 5th October 1520 and again on 21st February 1522 he was arraigned for alleged complicity in the murder of one George Leslie or Dunlope as an accomplice of George 4th Earl of Rothes and his uncle Andrew Forsyth, the charges not being proven, were eventually dropped a dispute over his payments to the Church was resolved on 15th April 1522 when he was obliged to give an annual rent of 30 shillings from the lands of Nydie to the Friars Preachers of St Andrews.

John married Margaret Bruce the eldest daughter of Alexander Bruce of Earlshall  and was the father of:

JAMES FORSYTH 6th of NYDIE married Lady Elisabeth Leslie,eldest daughter of George 4th Earl of Rothes her mother Lady Margaret Crichton was a grand-daughter of King Robert III, whilst her brothers were Norman and William Leslie, the assassins of Cardinal David Beaton at St Andrews in 1546.

On 9th June 1525 the King transferred the superiority of Nydie from the Archbishop of St Andrews to George 4th Earl of Rothes.

The Earl of Angus, who had married Margaret Tudor, widow of King James IV had kept the young King James V under his tight control, James Forsyth of Nydie together with other Fife Lairds joined the forces of the Earl of Lennox in an attempt to rescue the King at Linlithgow, an attempt that failed, however, the King still under the protection of Angus pardoned James Forsyth of Nydie and other Lairds for appearing in arms against him in a remission dated 14th August 1527.  As an aftermath of the Linlithgow affair respite  was made to James Forsyth of Nydie on 23rd July 1538 for the art and part of the slaughter of umquil Thomas Hay of Sanfurd, one of his neighbours who had supported the Earl of Angus.

In 1541 ,having reconciled with King James V , he was appointed to the Royal Household a “Servitor Regis” and made a “Servant of the Body” or Groom of the bedchamber.  From 1533 to 1552 James Forsyth rented one sixth portion of the adjoining lands of Kincaiple. 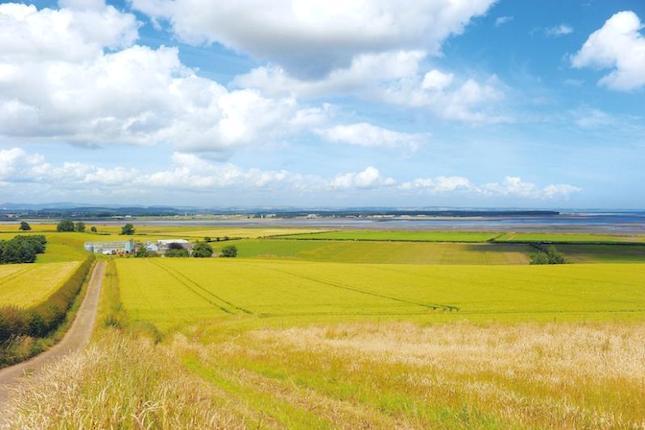 On 1st March 1546 George Wishart was burnt at the stake to become Scotland’s first Protestant martyr and on 29th May, Norman and William Leslie, Elisabeth’s brothers, together with others attacked and assassinated Cardinal David Beaton at St Andrews Castle.  In 1547 James Forsyth of Nydie was admitted a Burgess of Dundee on the basis of property he owned there.

On 20th November 1552 he made a charter in favour of the Friars Preachers of St Andrews of an annual rent of thirty shillings but on 30th January 1553 he was admonished for not satisfying the said covenant of three pounds for the past terms and warned to fulfill his obligation under penalty for each offence James died in June 1553.  Elisabeth died 1577.

He was father of:

ALEXANDER FORSYTH 7th of NYDIE matriculated at St Salvator’s College, University of St Andrews 1540. He married Margaret Bruce, sister of Alexander Bruce of Earlshall in 1546. On 14th June 1553 he was granted a sasine for the fishing rights  in the waters of Edyn and of the adjacent lands of Drone.   In 1569 he was appointed Baillie”in hac parte” to enable him to pursue an action on behalf of the Burgh of St Andrews.  In 1577 he was recorded as owing debts to St Salvator’s College.  Together with his spouse he received a charter from John Douglas, Archbishop of St Andrews for one sixth part of the lands and village of Kincaipill.   He died in February 1581 and was father of:

JAMES FORSYTH 8th of NYDIE matriculated from St Salvator’s College,University of St Andrews in 1561. He married Janet Learmonth daughter of Sir Patrick Learmonth, Provost of St Andrews who sat in Parliament from 1560 to 1566.  James became an Elder of Holy Trinity Church 1586.  James died on 3rd January 1587 and was father of :

JOHN FORSYTH 9th of NYDIE married Margaret daughter of Patrick Adamson and Elisabeth Arthur under a contract of marriage dated 15th September 1588.(Ref 58)   John died in January 1604.  John was the father of:

John being without male heirs was succeeded by his brother Alexander.

ALEXANDER FORSYTH 10th of NYDIE he married Margaret Bruce at Darsie Church on 6th February 1582 and on 26th January 1592 he received sasine from King James VI for the lands of Balmullo. In 1598,James Learmonth of Balcomie,cousin to Alexander’s mother entered into a contract with King James VI to colonise the Island of Lewis in the outer Hebridese, bringing the King’s peace and authority to what was a lawless extremity of the kingdom.

The participants were to be granted baronies and in 1600 the King granted sasine of the island to the group known as “The Fife Adventurers”.  The group set sail but after a short fight with the islanders were defeated and captured in 1601, either as a financial backer or participant in which case he would have been ransomed, Alexander lost a considerable sum of money so that in 1603. He was obliged to borrow money from St Salvator’s College, University of St Andrews.

By an obligation dated 23rd October 1604 recorded in the books of the Council and Session in March 1605,  Alexander Forsyth of Nydie became bound to pay Sir John Learmonth of Birkhill, brother to James Learmonth of Balcormie who had perished in Lewis, failing whom to Kathleen his daughter a sum of Three thousand eight hundred and fifty pounds or to insest it in an annual rent from the lands of Nydie of Three hundred and eighty-five pounds a year until the principle was paid.

On 2nd July 1607 Alexander Forsyth of Nydie was “put to the horn“ for not paying William Balfour, brother of the Laird of Balledmonthe an annual rent of Three Hundred merks due and on 7th July 1607 the courts heard a petition for a summons by John Ramsay of Pryourletham against William Learmonth, apparent of Darsie for whom Alexander Forsyth of Nydie had agreed to act as cautioner.

The Captain of the Guard was instructed to apprehend Alexander Forsyth of Nydie’s goods and inventory items to the value of two thousand merks for “The Kings Use”.   It is a matter of history that many Fife Lairds went bankrupt and lost their estates at this time as a result of having guaranteed the ill-fated Fife Adventurers.  Alexander Forsyth of Nydie died in 1610, he was the father of:

At this time there were severe plague attacks in St Andrews.

Links to Alexander Forsyth (The Younger) and the Irish Connection

Another possibility is that young Alexander, following the death of his mother was recruited by the family friend and neighbouring Laird, Thomas Ramsay of Brakmont, an “Ulster Planter”, hence Alexander would have left Scotland.

The merk was a Scottish silver coin. Originally the same word as a money mark of silver, the merk was in circulation at the end of the 16th century and in the 17th century. It was originally valued at 13s 4d (exactly ⅔ of a pound Scots, or about one shilling in English coin), later raised to 14s Scots. 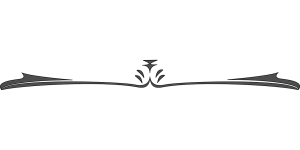